“The case is strong” they write, that it’s “the best place to eat in Italy“.

Read the whole article in English and/or in Italian.

You’re not so hot at reading in Italian?

Funny you should mention that…

You’re receiving this email because you filled out the form on the school website or because you asked for information about our Italian courses.

The above counts as ‘information about Italian courses’, so hopefully that’s OK with you.

But if not, do please take a second and click the ‘unsubscribe’ link which you’ll find either at the top or bottom of this article.

That just takes seconds to do and once unsubscribed you won’t be bothered again.

Well, ALMOST to Madrelingua. Just down the street, anyway.

But I’m sure she would, were she ever to feel the need to improve her Italian…

The ‘Blessed Virgin’ in question is an icon, normally kept in the Sanctuary of San Luca, which is that landmark church you can see on the top of a nearby hill, visible from many miles away as you approach Bologna on the ‘autostrada’.

Each year there’s a procession to bring the icon down the hill to the cathedral of San Pietro in the center of the city.

She stays in the cathedral for a week, and is then carried back up the hill in another procession.

The story goes that back in 1433 the spring weather was unusually bad, so much so that there was a risk to the harvest, and thus of starvation for Bologna’s poorer inhabitants.

The city fathers decided to pray to the Blessed Virgin for a break (in the weather), and amazingly the downpour stopped! 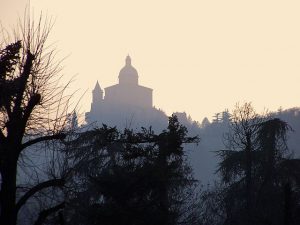 This miracle is celebrated each year with the processions, from sanctury to cathedral and back again.

The Virgin arrived in town on Saturday evening, which I personally would have thought was ill-advised…

She can be admired all week at the cathedral, on Via Indipendenza.

And in Via Altabella, the street that runs down the right-hand side of the cathedral, there’s a festive market to celebrate.

It’s a long time until Christmas, so best stock up on candy-coated nuts while you can.

One of our teachers was worried that new students arriving at the school this morning wouldn’t be able to find us easily, as the market stalls make the building’s entrance hard to spot.

If that’s you, that is to say if you’re wandering around the historic center of the city cursing Google Maps, then don’t despair!

Via Altabella is the street that runs parallel with Via Rizzoli, Bologna’s sort-of main street, the one with the famous ‘two towers’ at one end and Italy’s biggest piazza at the other.

Go down the alley next to the Apple Store, and you’ll find it easily enough.

We’re at number 11, just to the left of the bookstall, opposite the artisan cheese-maker, between the cathedral bell tower and the much uglier oblong tower.

Catch you later, then!

Which is the right Italian language course for you? Choose one of the courses below... please note … END_OF_DOCUMENT_TOKEN_TO_BE_REPLACED

Bologna, nicknamed the "red" (for its roofs), the "learned" (home to Europe's oldest university) and … END_OF_DOCUMENT_TOKEN_TO_BE_REPLACED