You are here: Home / News from Madrelingua Italian Language School / A summer post card from Bologna!
from Aga Midor (Poland)

Dear Mom, Dad and everyone at home,

Here’s an update on my first month in Bologna!

Two minutes at the bus station and I’ve already met an Italian guy who wanted to help me. The stereotypes of Italian guys are true! But the atmosphere here is so friendly. 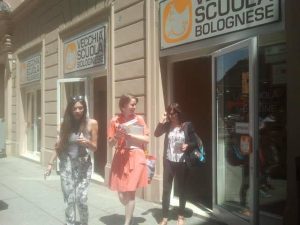 Near my school, Madrelingua, the girls from my Italian course and I discovered a cooking school, “Vecchia Scuola Bolognese”.

We also love spending time with our teacher, who knows everything about Bologna and its cultural events. 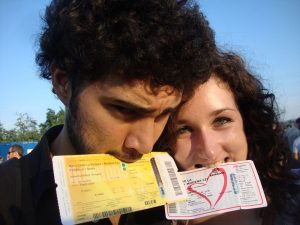 Here’s a picture of me at the Manu Chao concert.

We prepared sandwiches to take with us (in Poland you’re not allowed to bring food or drink into concert venues but, as always, Italy is a country without problems). We had a wonderful time! 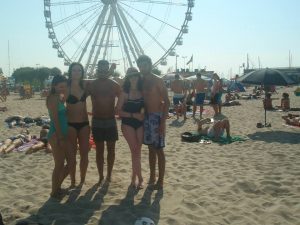 The weekend was so hot everyone was deserting the city, so we decided to go somewhere too.

Rimini is less than an hour and a half from Bologna by train, which at least had air-conditioning!

We spent all day on the beach, eating, drinking and playing in the water… but went rather red from the sun.

Back at the station, our train was late, and packed. But, after all day lying on the beach, we didn’t care about sitting down. And we had so much fun with the other people on the train, who all had the same problem and so were very friendly.

I’m having a lovely time… Wish you were here too!

We love Bologna, even in the July and August when it can be rather hot. Know any good places to have fun while staying cool?  We’d love to read YOUR top tips for enjoying our city during the torrid summer months, so visit the website and leave a comment on this post.

Which is the right Italian language course for you? Choose one of the courses below... please note … END_OF_DOCUMENT_TOKEN_TO_BE_REPLACED

Bologna, nicknamed the "red" (for its roofs), the "learned" (home to Europe's oldest university) and … END_OF_DOCUMENT_TOKEN_TO_BE_REPLACED