You are here: Home / Learn Italian In Italy? Bologna! 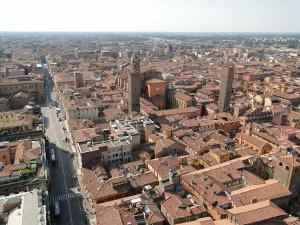 Bologna, nicknamed the “red” (for its roofs), the “learned” (home to Europe’s oldest university) and the “fat” (the world-famous cuisine), is the perfect place for Italian courses in Italy!

As the regional capital of Emilia-Romagna, home to one of Italy’s major universities and a thriving engineering industry, Bologna is a wealthy, well-educated city and so boasts many fine restaurants, museums and theatres. There are, of course, many students and young people, so the night-life and general “buzz” is excellent.

In short, Bologna has everything Italy can offer (history, cityscapes, countryside, fine dining and wines), all within easy walking distance, and all without the crowds or the queues of the more obvious Italian destinations! 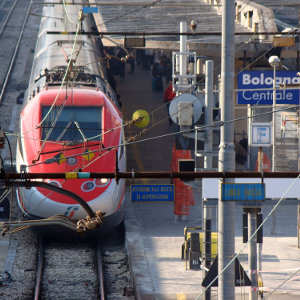 Getting to Bologna is easy!

Getting here is easy. Bologna has its own international airport, and is the major Italian rail hub, so wherever you want to go, you’re just a short, rapid train journey away: Florence, Venice and Rome are all easy, inexpensive day trips from here! 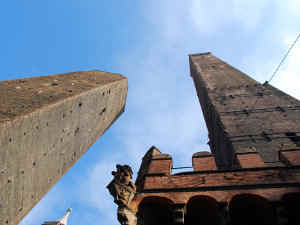 Bologna has many old towers, remnants of a tower-building craze which seized prominent local families and institutions hundreds of years ago. Of the ones that survive, the most famous are the two towers located at the junction of Via Zamboni (university district), Strada Maggiore, and Via Rizzoli. As you can see, they’re so tall, taking a decent photograph is not easy! 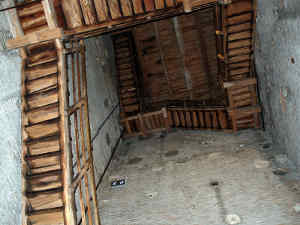 Climbing the Asinelli Tower is an experience!

The Asinelli Tower, the taller of the two, is open to visitors. You can climb all the way to the top on rickety wooden steps, while reflecting on how the modern concepts of health and safety have yet to reach Italy.

Legend has it that if you haven’t graduated from university yet, don’t climb the tower, or you never will finish your studies! 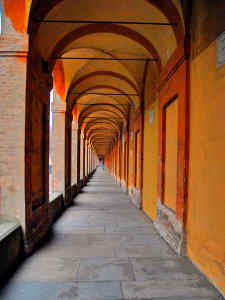 Bologna is famous for its porticoes…

The Bolognese are very proud of their porticoes, which allow private buildings to occupy the space over the pavements/sidewalks of the city center. This architectural feature does give the city a distinctive look, as well as sheltering its citizens from the rain or hot sun.

Various explanations exist for the extensive construction of porticoed streets in Bologna: from providing dry places for hard-up medieval students to sleep, to creating a space for silk worm rearing (hanging from the ceilings of the structures, apparently). While nobody seems to know the true explanation, the effect is to create a city which is perfect for visiting on foot no matter what the weather! 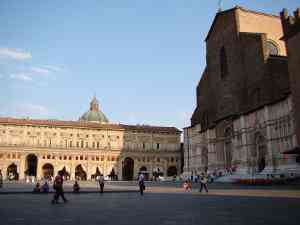 Piazza Maggiore is nothing if not big!

OK, all Italian cities have piazzas. But this must surely be one of the biggest! And the church you can see on the right was originally planned to be even bigger than St Peter’s in Rome, until the Vatican intervened to stop construction. You can still see the unfinished bits on the sides.

There must be a reason, too, why there always seems to be an army vehicle on guard in the piazza. It’s the only place in the city where I’ve seen regular troops standing guard, so there must be a historical explanation. But I’ve never had the courage to ask them. Why don’t you? 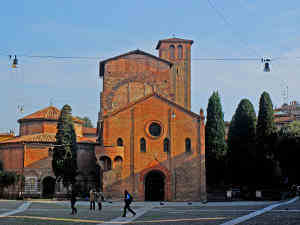 Piazza Santo Stefano really is beautiful, perfect to hang out in on a sunny day, but a must-visit in any weather. And while you’re there, visit the famous complex of seven churches. On your way back towards the center, take the short cut through Corte Isolani to Strada Maggiore. 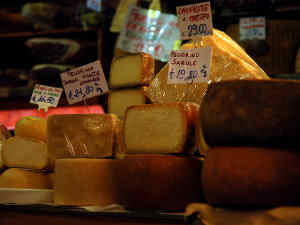 This city is foodie heaven!

A visit to the Mercato delle Erbe (Herb Market) in Via Ugo Bassi is a must for foodies. Fruit and vegetables, cheeses, cured meats, fish – you name it! 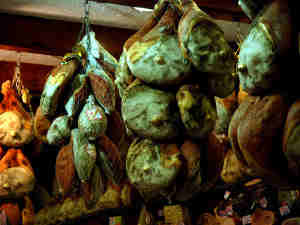 Not really a city for vegetarians..

Bologna is admittedly not a paradise for vegetarians. But for the rest of us, the Parma-style cured hams are irresistible. Try “prosciutto crudo” (“raw” ham) with crescentine or tigelle, washed down with Lambrusco from the Modena area, for one of the real taste sensations of Emilia-Romagna.

Things to see and do 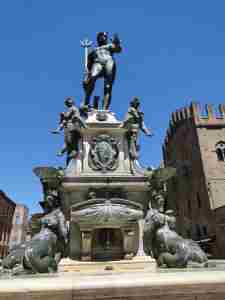 Meet me at Neptune!

Wherever you plan to go to enjoy yourself in Bologna, you’ll need to fix a place to meet your friends. The traditional meeting point is the statue of Neptune in Piazza Maggiore. “Meet you at Neptune at seven!” 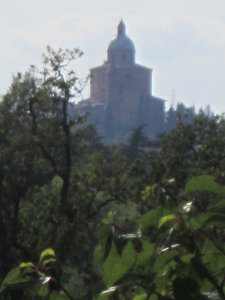 You’ll know when you’re approaching Bologna – just look up – the distinctive shape of the church of San Luca, on a hill over the city, is clearly visible from many miles away. 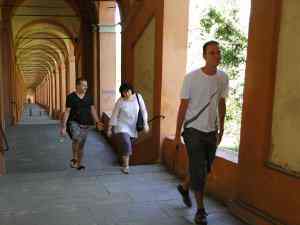 After all that fatty food, a walk up to San Luca is just the thing!

To actually visit the church, follow the porticoed streets out to Porta Saragozza. From there, the porticoed walkway continues out to the base of the hill, and all the way up to the top!

Local residents, as well as visitors, walk or run to the top for exercise! Why not give it a try?

Which is the best time to visit Bologna? 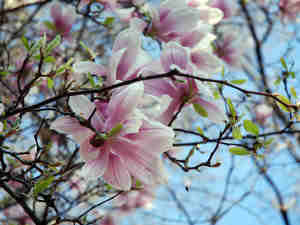 Spring and Autumn are the best seasons to visit Bologna

Spring and autumn/fall are wonderful seasons in Emilia-Romagna, and definitely the best times to visit if you have a choice.

It’s true that summer in Bologna can be hot and humid, and that winter tends to be long and dark. But even so, each season has its compensations: shopping, dining out, Christmas lights and January sales in the winter, light clothing, pavement cafes and long, cold drinks in the summer.

So our advice is: come any time, Madrelingua’s always open!

How to book your Italian course in Bologna