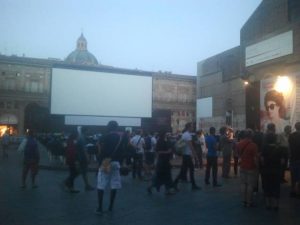 After a day on the beach, I went to Piazza Maggiore to watch an old movie outside, “under the stars”.

For a few weeks, every night an old movie, so you can improve your Italian while  sitting outside in the piazza.

I was late, so couldn’t get a seat… but that’s normal. When it’s a good movie, people are happy to sit on the floor.

That evening I saw “Design for living” an American comedy directed by Ernst Lubitsch with Fredric March, Gary Cooper, and Miriam Hopkins.

The Italian translation of the title is “Partita a quattro”, which means “game for four people”.

The movie was in Italian, with Italian subtitles, so it was a good chance for me to practise listening and to learn some new expressions. I managed to understand the plot, plus most of the dialogues… Really!

The story is about Gilda Farrell (Miriam Hopkins) who is in a relationship with the boss of an advertising agency, Max (Edward Everett Horton).

But then, when she takes a train to Paris, she meets two men, George (Gary Cooper) and Tom (Fredric March), who both fall in love with her.

The problem is that she also starts to feel something for them, and so she leaves her boyfriend of five years, Max.

However, she can’t decide between the two men who love her, and the trio agree to try living together in a platonic friendly relationship.

After one month of Italian classes, I was able to read subtitles during the film…I’m so proud of myself!

Have you tried watching a movie in Italian? How did you get on? Leave a comment so we can talk about it!

Which is the right Italian language course for you? Choose one of the courses below... please note … END_OF_DOCUMENT_TOKEN_TO_BE_REPLACED

Bologna, nicknamed the "red" (for its roofs), the "learned" (home to Europe's oldest university) and … END_OF_DOCUMENT_TOKEN_TO_BE_REPLACED