You are here: Home / News from Madrelingua Italian Language School / Italian phrases for every Bologna conversation
By Aga Midor (Poland)

A song on the radio reminded me that “Per ogni cosa c’è un posto” (There’s a right place for everything). Which set me thinking about how the places we visit affect who we are, and what we say.

One of the first things I noticed when I came to Bologna to study Italian was the fact that people here love to talk, talk, talk. And about everything! But it soon became clear that the topics of conversation vary depending on where exactly in the city you are.

As do the phrases you’ll need to know in Italian to join in. I was in famous Piazza Verdi when I realised that. 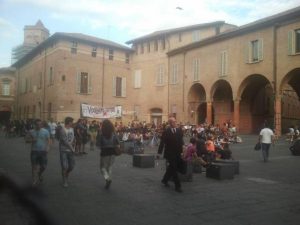 It has a radical reputation, and is well-known to students and young people, as well as to the older residents of this ”talkative city”.

So, let’s take a seat, have something to eat or drink.

We can spend a little time mulling over the problems of the world, or perhaps listening to live music.

Ignore the waiting squads of riot police. It’s a local tradition, I think.

But hey, before you leave home, you should brush up on phrases like: “La politica non si prende le sue responsabilità” and “Dobbiamo rispettare il nostro pianeta”.

Prefer somewhere quieter (or less political)? Well, there’s Piazza Santo Stefano, where you might enjoy a glass of wine and can easily pass the day chatting about music, love or food.

Orto Botanico: by day, & by night

The Orto Botanico (Botanical Gardens) by day is just a modest park near the university, though it’s an ideal place to stroll and fret about your exams with other students. Modestly say: “Questo esame è troppo difficile, non lo supererò mai”.

By night, though, it’s the place to celebrate your success, with concerts, games and parties ’till 2 a.m. “Evviva, che soddisfazione! Ho superato l’esame…ma tanto lo sapevo!”

Due Torri: see you this evening! 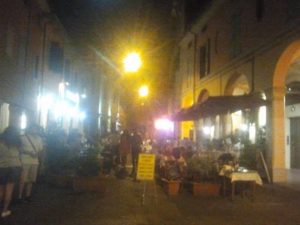 The unmistakeable Due Torri is an obvious place to meet up with friends to make plans for the evening.

For example, this year, at 10 p.m. each evening from 29th June to 6th July we went there to watch movies and hear famous directors talk about their work.

Giardini Margherita: soak up the sun 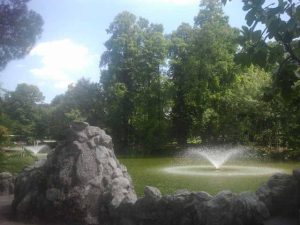 And when the sun’s shining, don’t miss Giardini Margherita, Bologna’s largest and most popular park.

Frequented by students, families with childen, lovers, & the ubiquitous joggers, it’s THE place to go on a nice day to escape the noise and bustle of this timeless city.

Which is the right Italian language course for you? Choose one of the courses below... please note … END_OF_DOCUMENT_TOKEN_TO_BE_REPLACED

Bologna, nicknamed the "red" (for its roofs), the "learned" (home to Europe's oldest university) and … END_OF_DOCUMENT_TOKEN_TO_BE_REPLACED